UN NASR - THE STATUS FOR HELP

BRIEF EXPLANATION OF THE SURAH:

A mental revolution is a fundamental change in thought or opinion that takes place in a relatively short period of time. In the context of the book Quran, mental revolution happens by turning of heart due to continuous agitation in mind. Complete change or modification from existing constitution to another is like a opening of mental block / lock from the key of consciousness / state of awareness but this is not an ordinary task but a great victory.

The respected author of the book Quran says when you see that your agitated mind is continuously preventing you from submitting to your own conscious level that means it is  provoking you to rise to another conscious level. Agitation of mind is a sign that it wants to leave the comfort zone and grow. When this happens you should strive hard with integrity, knowledge and hard work to restore yourself from scatterbrained.

With the identification of the System of Consciousness, the Rehman, the Raheem

(2) And you often observe / feel the continuous interference of agitated mind in submission of Allah [System of consciousness] spreading / catching moderately,

(3) So strive with approval of your Consciousness [Rabb] and seek His protection, Indeed He (Rabb) is ever restorer.

إِذَا = When, denotes a thing happening suddenly or unexpectedly or experiencing the occurrences of a thing when in particular state - time adverb

وَ = And - waw's function is conjunction as well as it explains the following word. In Quranic context و is very often is used as واو الحال (waw al-Haal) - that is emphasizing the description or condition of the following word or sentence coming after waw. For example 57:25 and 42:17 - here و is explaining the book that it is balanced rather than separating balance and the book - In 2:151 و is describing the book that it is full of wisdom rather than separating the wisdom from the book.

الْفَتْحُ = The Opening, Explain or made clear which was dubious or confused, open or reveals, prompted in order to know, good opportunity - nominative masculine noun

فَسَبِّحْ = So strive [for knowledge], getting himself immersed (swimming where hands and legs strives), occupies/busy himself, (Masbah = swimming pool= where one strives) - 2nd person masculine singular (form II) imperative verb

رَبِّكَ =  Your Conscious, Mind, Lord, Nourisher, Possessor, Sustainer, Owner, Having Authority, Ruler, Governor, Commander, Up-bringer, Master, Chief, Reformer, King, Ribbath/Rabbiun means group of learned/like-minded people with similar aim, Rabbani means knowledgeable man - Rabbul Aalameen means The knowledgeable Consciousness. Rabbul bait is head of the family and Rabbathul bait means house wife. As no translator has clearly defined the invincible Rabb, thereby creating confusion and encouraging the philosophy of supplications, addressed to the mysterious Rabb without action - Rabbani means learned or knowledgeable man,Tarbiyat means upbringing, Rectifier, Reformer, Accomplisher, Bringing to the state of completion in degrees. Rabbubi means science, or knowledge- Marabb means one who counsels - After an intensive study of the meaning with the “Quranic” context, I concluded that if we have to define Rabb in a simple and a single word which encompasses the essence of the meaning of Rabb, then Mind/Conscious is the right word which represents the word Rabb. Understanding the essence of the message is of utmost importance, than just sanctifying the word and venerating it. My aim is that the translation should be reader-friendly, simple, logical and subjective, without fear, greed and sacredness of any sort and above all it must be educative and appealing to all mankind.  – genitive masculine noun – 2nd person masculine singular possessive pronoun


FROM THE TRADITIONAL POINT OF VIEW:

As per the traditional point of view this surah is related to the conquest of Mecca and the verses are exclusively addressed to the honorable messenger (2nd person masculine singular). Again according to the traditional understanding it indicates that the above surah is exclusively concerned with the honorable messenger only. And the "God" is instructing the messenger to hymn the praises in His favor, thus portraying "God" as praise hungry. There is no guidance for the mankind at large and the message of this surah is simply confined to the messenger.

The traditionalist portray this surah as a surah of victory and conquests. This type of narrow thinking promotes the urge for having a "God's Rule" and thus compelling people to think on the lines of victory, defeat and conquest. Such thinking pattern sow the seeds for having a need for God's Rule or imposing our version of doctrine, camouflaging it as "God's will or rule". Thus creating the belief of "fortunate chosen one's" and breeding the fatalistic or fanatic attitude in the young minds of "paradise seekers".


LESSON FROM THE SURAH:

Strive hard with integrity and knowledge if you want to open the lock or mental blockage of your consciousness / awareness. Understand the interference from the agitated mind, it is a sign of growth. Remember nothing grows in comfortable zone, out of box thinking is a must. 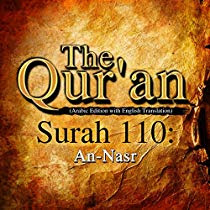