DON'T FIT IN WHERE YOU DON'T BELONG.

A question raised by a friend “how to know what to do in life". Very often we have to compromise what we love to do. We are being taught that earning for a living is more important than following our inner call (azaan)?
We have to force ourselves to fit where we don't belong. Knowing very well that we are not made for that kind of job? It is really regrettable that we have to look out or find some guidance from outside when the book of actual guidance (Al-Kitab) is embedded in all of us.
That's why it is important to discover, understand and follow our inherent script [al-kitab]. Unfortunately very early in life we are being brainwashed or compelled to copy / imitate others and we ignore the signs [ayaats] of the al-kitab present in all of us. When we don't recognize our inherent script (Al-Kitab), we unconsciously kill all the messages and messengers present in us.
The result is we lose direction and confidence in our own abilities / script and we simply follow like zombies what is taught to us by our society or follow some holy books... in this case our society or physical guides are our teachers but not Rehman the teacher of of our inherent Quran / Furqan [not a physical book]. Thus we become Mushrik by ignoring Kitabil-Allah (inherent messages and signs) and we discard our revealed expression [Quran] whose teacher is Al-Rehman. 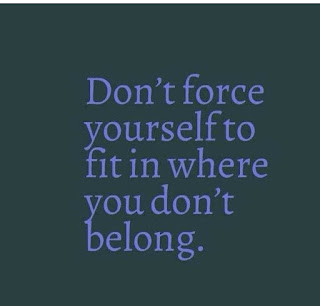 The actual or a real Quran is the low voice of our inherent rasul, listen to it carefully. It is in our own language, don't let it get lost in the louder voice of dajjaal (false propaganda and vanity). This 114 chapter book is not our Quran as it is not in our language. It is just a guide to discover our own Quran and Rasul. The Qur'anic phrase quranun arabiyun means the settled or downloaded expression in our own language. The real Quran is a beacon of enlightenment and it's teacher is Rehman [One who reveals the Quran upon us and teaches us the Quran as well]


The reason we are not successful in life is because we don't recognise our own script (Al-Kitab) and tend to follow / imitate others. With so much false information smeared upon us, now it is very difficult to remove those layers and discover our true and unique role.


Understanding and connecting with our script in a very early stage of life is key to success. This connection with our own script is Salat.


No doubt our own rasul will complain to his personal Rabb that we have discarded this Quran (the voice of our rasul), in short we have not used our own intellect because we are more connected to the outside world than our inner world.
After reading this small above article a friend asked me; I like your explanation, however would ask you that in accordance to your opinion what is our guidance book?
My explanation:
It depends on what guidance you want.
If you want to learn cooking you would take cooking book as your guide or a good chef as your guide.
If you want to learn driving you would join driving school,
If you are interested in mathematics, physics, chemistry, biology, history or any subject, you would take guidances from those books.
If you want to learn to operate some electronic gadgets you would refer it's manual.
Some things are natural, we don't have to learn them, they are embedded in us and we don't require guide books for them.
Permanent moral values are same in every religion, we don't need a special guide books for it.
We need to discover our own book of guidance [Al-Kitab], it's embedded in all of us and Quran is the part of Al-Kitab. The Quran in us will guide us our unique role in life. It will direct us to whatever career we need to choose to be happy, satisfied, content, secure and peaceful in life. But usually we prefer money or material above peaceful and happy life. Thereby we reject Islam (peace of mind) as our way of life (Deen).
Posted by Ahle Aqal at 12:59 No comments: 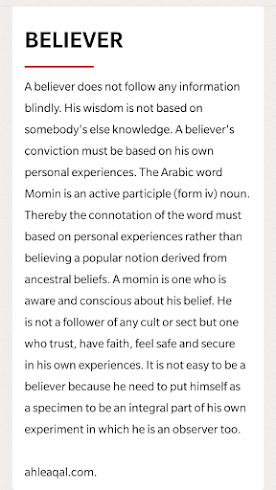 A friend ask me to explain the last sentence, here we go..
//"It is not easy to be a believer because he need to put himself as a specimen to be an integral part of his own experiment in which he is an observer too."//
The word Momin signifies knowledge based on conviction from his own personal experience. The status of a Momin is greater than those who are educated by reading someone's else book or hearing somebody's else experience. To become a Momin one has to become a specimen by putting himself on the aperture of the microscope and experience / observe the experiment he is undertaking upon himself.
The faith, trust, security he achieve by experimenting upon himself is far greater than all the qualification he could acquire through theoretical knowledge.
Hence Momin is a person who is self aware or self conscious and self taught by experimenting on himself. A Momin is more secure, feel more safe, more confident because his trust, faith and conviction is far greater due to the virtue of acquiring wisdom and knowledge by undergoing through the experiment upon himself.
Usually people think believer is blind follower but in terms of the book Quran when the word Momin occurs it means he is not a blind follower. The author of the book is addressing those believers who have [shahadah] witnessed / seen / experienced the entire ayaat [signs] by themselves.
If you have not witnessed, observed, experienced Allah and Rasul in your life time then you are not a Momin according to the term momin of the book Quran and your utterance of witness [Kalimah Shahdah] is a BIG LIE.

QUESTION BY AN ATHEIST

A question asked by someone in a FB group -

Questions for Muslims:
If I know that sticking my finger in a fire will burn my finger, and I choose to stick my finger in a fire regardless, does it make sense for me to get angry at the fire when my finger gets burned?
Similarly, if Allah creates sinners knowing that they will sin, does it make sense for him to get angry when they do sin?
We are told that nothing happens against Allah's will. But if that's true, then it's also true that sins don't happen against Allah's will. In other words, sins only happen because Allah wants them to happen. But if Allah wants sinners to sin, why does he feel the need to punish them for sinning?

My Answer:
All your questions are valid. In your questions you used the Arabic term Allah 4 times without knowing it's exact connotations.
Your questions are in English but you have not interpreted the term Allah because very vast majority of us think that Allah is God, all Powerful Judge, Accountant, Teacher, Giver of Punishment and Reward for our deeds.
Those who keep such a concept of Allah either deify Him or ridicule Him as they don't want to understand this term. They think their knowledge is sufficient.
The book Quran clearly say that there is no god/God (ilah) except Allah. The problem start when we believe Allah as a Bigger God contrary to the basic teaching of the kalimah that categorically reject the concept of God/god.
Unfortunately we have not understood the term Allah and assume it as Almighty God and make Him either the object of worship, hate or ridicule.
Islam is not a religion of God or fairy tales about God and His soldiers. The term Allah has no gender, still I am using masculine gender instead of using a neutral gender; just to make matter easy for everyone to understand.
The book Quran is a victim of wrong interpretation and translation. It clearly says there is no God/god but we are bent on worshiping that invisible God personified as Man.
In short Allah means our own consciousness, our own mind and Rasul is the voice of our consciousness. The entire drama or the narrative of the book Quran is played inside us. Nothing is physical, historical or geographical in the book Quran. All the names of the characters have meaning and they are not proper nouns either.
The book is written in theophany format so we misunderstood it that it is from the sky God.
Posted by Ahle Aqal at 02:10 No comments: