Al-Kafirun in Quranic context simply means the concealed, ignorant, arrogant out of sight thoughts. The word Kafir does not describe any particular person but a characteristic of ego / vanity present in all satanic thoughts. Man is a product of his own thoughts and the message of the entire book Quran is how to evolve our bad thoughts and convert it into good thoughts. Ibless is described as Kafir and arrogant in the book Quran - 2:34. Iblees is not a physical character but a specific character or thought of our own self who sneaks and keeps on whispering or influencing and hiding our pure nature.


Kafir - Mushrik - Munafiq - Fasiq - Mufasidun - Mukazabin - Momin - Muslim, Yahood, Nasara are distinct thoughts / ideologies of different layers of our own level of self - We have to nurture some and some we have to kill or delete or educate from our System of Consciousness. They are not persons belonging to particular communities but they are moral principles that govern a person's behavior or conduct an activity of a system of ideas and ideals, especially one which forms the basis of our character.


Kafir in the Quranic context are that thoughts which refuses to acknowledge, recognize or digest our own inherent script [Al-Kitab] or signs [ayaats] - a skeptical - not accepting a guidance from the script - manifesting unbelief, rejecting core constitution of self. This happens because the knowledge is covered by ego and vanity. In that case we all are Kafirs and this Surah is an advice to all of us.

In short this surah states that what I do is none of your business, if it suits your thought process, you follow my way or you follow what suits you. There is no compulsion in Deen [obedience / submission] (2:256). So there should be no debates and arguments beyond a certain limit. It tends to create a demarcation of beliefs and how one must hold back oneself from enforcing their views and opinions. Though the basic meaning of Kafir is - one who covers, conceals a thing or denies the facts or dis-acknowledges it, ungrateful and ignorant. The general conception of the word Kafir is derogatory to "non-muslims" thanks to the traditional thinkers. In this surah Al of Kafir is describing a specific character present in all.

"Islam" or Peace / Security is not an ism, as  generally believed. The traditional thinkers have divided mankind into two classes

1. Believers in "Islamic ideology", they are called Muslims.

2. Non believers in "Islamic ideology", they are called Kafirs.

But the fact is otherwise. The message of the book Quran is applicable to entire mankind and it's main subject of discussion is how to achieve PEACE/SECURITY for self. Just like when, man cannot survive without the basic necessities like air, water, and food, in the same way he cannot survive without peace / security. So Peace / Security is not somebodies ancestral property that can be classified into two main groups, then again further sub-divided into many smaller groups each claiming to be the sole heir of the property called "Islam" or Peace. Peace / Safety is a basic need of everyone and it is the topmost priority for everyone. Peace, Shanti, Shalom, Salam are not somebodies monopoly but everybody's requirement.

The teachings of "Quran" is not divisive, but some sections of people make an impression that they are the sole teachers of the message of Peace/Security. And only their version of understanding of the message is correct.  Thereby branding others who don't subscribe  to their understanding, as "The Kafirs" [Ignorant thoughts].

The meaning of Muslim is, one who is at peace with self. If one is safe and peaceful then only he can cater to the peace and provide security of others. Those who are not peaceful are called mischief mongers (الْمُفْسِدُونَ). Although Muslim, Mufasidun are all nature of our thoughts.

There are only 3 important words in this surah, which should be understood in the right perspective. They are Kafir, ibadah and Deen.

أَعْبُدُ - تَعْبُدُونَ - عَابِدٌ -  The word Ibadah is used in different derivatives in this surah, which means to serve, worship, adore, revere, regard - Ibadah actually means to serve whole-heartedly or with reverence/obeisance etc

دِينِ = Became obedient, borrowed, submissive, enslaved, served, followed, governed, managed, possessed, owned it, authority over it, inherent law, under obligation, obedience, habituated, accustomed, indebted in debt, religion, code of life, way, dispensation, etc - Madeena is one of the derivative of Deen, which means city or place under an authority or submission.

(2) I do not serve which you serve

(3) And nor will you serve that which I serve

(4) And I shall not serve that which you are serving

(5) And nor will you serve that which I serve

(6) To you your obedience, and to me my obedience.

THE THOUGHTFUL MESSAGE OF THE SURAH:

Our own ignorant thoughts are precisely addressed that I am not going to follow your seducing ways. Here no physical "non-believer" is addressed as generally perceived but the message is to our own suppressed / concealed thoughts which are present in all of us that are being addressed.

For example just like some smokers know that cigarette smoking is injurious to health still they hide the fact or ignore the hazard and keep on smoking – They refuse to accept evidences and proofs presented to them by the highest authority on that subject. Such thoughts are KAFIR because they hide / camouflage the truth in spite of knowing the truth. Their addiction refuse to accept the fact, such hideous thoughts are also arrogant, dominating and not letting the right thoughts to enter in their system. Similarly if some thoughts suits me, not necessary that it would suit all and that all should be forced to accept it. If the thoughts rejects or refuses to accept an explanation in this case the thought is a kafir because the egoistic thoughts ignore/rejects/hide the explanation of right thoughts. Kafir is just a word having simple meaning like any other word but non-Arabs have made it look like an abuse. The basic meaning of Kafara is to hide, veiled, dis-acknowledged, denied, concealed, covered, conceal etc. The word Kafir has nothing to do with not believing in "God". Kafir does not believe in his own inherent script [Al-Kitab]

Here it is very important to understand the meaning of Deen. The correct essence of the meaning of this word will help us in understanding Deen throughout the Quran. Usually when the word Deen is mentioned, Islam comes to mind. Although Deen does not represent "religion Islam" only. Deen is an extremely subtle word which needs to be understood in the right perspective. The meaning of Deen, varies from context to context but without change in the essence of the root word. Here Deen does not mean religion or ideology. Here Deen signifies that we are ruled by certain belief which we subscribe to, and we are under its influence hence we are obedient and submissive to it. An example of obedience (Deen) is, when someone is under a pressure of debt, and from that obligation of the creditor it is difficult to come out. When bad thoughts become our owner or master we are controlled or influenced by it and we work under the instruction or obedience of that bad master and our way of life is strayed from the right path. Finally wrong way of life become our deen.

Madeena a derivative of Deen, means a land under authority. A debtor is also under the obligation or under the control of creditor's terms and conditions, such a condition is also referred to as Deen. That's why in the beginning of the Quran itself, the respectable author clarified the relation of Man and Rabb, in verse four - Maliki Yaumi Deen means Owner of the dispensation. Here Rabb is the Owner or Giver / Dispenser and we are the borrower.

MANKIND ARE THE DEBTORS / BORROWERS OF RABBUL AALAMEEN

The respected author of the Quran wants us to know that our real master is the Knowledgeable Rabb and what we obey or submit to or serve is our Deen or way of life and it is we who are the subscribers of our Deen. We only serve to please our own Consciousness [Rabb] There is no compulsion on us to heed a certain way of life of subjugation [Deen]. Right thoughts enable us to spend peaceful life. Our thoughts are linked with our our way of life [Deen]. Selecting our thoughts wisely is the crux of the message of the book Quran. One must always remember to sustain our own Magnificent Rabb as Master/Owner and be always His obedient servant. Peaceful living can happen by entertaining / nurturing right thoughts. In fact we don't realize if we don't serve our Rabb [Mind / Consciousness] in a proper manner; we can fall prey to whispering of the Devil.


OUTWARD MESSAGE OF THE SURAH:

Specific emphasis is given to the haters/rejectors of any ideology or doctrine or person.


For instance what Mr. A – feels is right, it’s not necessary that Mr. B- would also feel the same and so he cannot be forced to feel in that manner. If there is any type of enforcement then it would lead to dispute and that would promote an unhealthy atmosphere which is not ISLAM (peace) but ignorance (Kufur). Killing each other in the name of ism is not at all recommended even if the denier rejects your ideology or doctrine or you.

What we accept or in obedience of it, is our way of spending our life and that is our Deen.

Obedience or Deen are not permanent features, but keeps on changing according to the situations.

What we don't accept/obey or what we deny/reject in spite of knowing is termed as Kafir. Nothing unholy about it.

The main lesson of this surah is tolerance and secularism. Live and let Live. 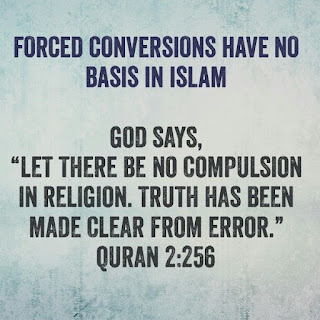