Killing an innocent unarmed person who does not subscribe to your ideology is not JIHAD but Cowardice and Extreme intolerance.
The most important battle a Mankind needs to fight is the battle within himself against sinful desires (jihad an-nafs). This is a struggle, a jihad in the path of Allah, in which all of us need to participate. The struggle, a jihad in the path of Allah [our own system of consciousness]; in which all of us participate either willingly or unwillingly, this type of Jihad is recommended by the book Quran too.
The book Quran tells us the sinful desires, thoughts within ourselves must be controlled and must peacefully submit to His will, and whoever does this will enter the Jannah [hidden garden of enlightenment].
WHAT IS JIHAD IN ALLAH?
22:78 – وَجَاهِدُوا فِي اللَّهِ حَقَّ جِهَادِهِ هُوَ اجْتَبَاكُمْ
29:79 - وَالَّذِينَ جَاهَدُوا فِينَا
How can anyone do Jihad in Allah if jihad is killing or fighting and how can anyone do killing or fighting if Allah is inferred as God? Allah is our own system of consciousness in which we fight / struggle on daily basis.
CONTROLLING NAFS:
The book Quran says: Surat An-Naziat 79:40
وَأَمَّا مَنْ خَافَ مَقَامَ رَبِّهِ وَنَهَى النَّفْسَ عَنِ الْهَوَىٰ فَإِنَّ الْجَنَّةَ هِيَ الْمَأْوَىٰ
As for him who feared the status of his Rabb [Consciousness] and he restrained the nafs [self] from his vain desires, then Jannah will be his refuge.
For this reason, it is declared that the true mujahid [struggler] who wages jihad [struggles] in the path of Allah [our own system of consciousness] is the one who wages jihad against himself [nafs].
It is reported by Fadalah ibn Ubaid:
الْمُجَاهِدُ مَنْ جَاهَدَ نَفْسَهُ فِي سَبِيلِ اللَّهِ عَزَّ وَجَلَّ
The one who strives in the way of Allah the Exalted is he who strives against his soul.
Source: Musnad Ahmad 23445, Grade: Sahih
The book Quran tells us in several verses that those who purify their hearts / mind from impurity will enter Jannah. In fact, no one will succeed in the World / Hereafter unless they approach Allah [our system of consciousness] with a clean heart.
The book Quran says:
قَدْ أَفْلَحَ مَن زَكَّاهَا وَقَدْ خَابَ مَن دَسَّاهَا
He has succeeded who purifies the soul, and he has failed who corrupts the soul.
Again the book Quran says:
يَوْمَ لَا يَنفَعُ مَالٌ وَلَا بَنُونَ إِلَّا مَنْ أَتَى اللَّهَ بِقَلْبٍ سَلِيمٍ
It will be a day/moment/period when there will be no benefit in wealth or children, but only in one who comes to Allah with a pure / sound / peaceful heart / intellect.
This jihad to purify the soul involves struggling against greed for worldly pleasures, hypocrisy, insincerity, hatred, envy, arrogance, anger, pride, vanity, narcissism and other evil traits which our soul uses to lead us into destruction. Mankind especially labeled Muslims without a doubt needs to make the struggle against these evils their top priority.
Indeed, some of the earliest and most sincere scholars among the righteous predecessors (salaf as-salih) considered the jihad against the soul to be the greatest and most important jihad.
Ibn Al-Qayyim reported: It was said to Hasan Al-Basri, “O Abu Sa’eed, which jihad is best?” Hasan, may Allah have mercy on him, said:
جِهَادُك هَوَاك
Your jihad is against your desires.
Source: Rawdat Al-Muhibeen 1/478
Abu Na’eem reported: Ibrahim ibn Adham, may Allah have mercy on him, said:
أَشَدُّ الْجِهَادِ جِهَادُ الْهَوَى مَنْ مَنَعَ نَفْسَهُ هَوَاهَا فَقَدِ اسْتَرَاحَ مِنَ الدُّنْيَا وَبَلَائِهَا وَكَانَ مَحْفُوظًا وَمُعَافًى مِنْ أَذَاهَا
The most difficult jihad is the struggle against desire. Whoever can prevent himself from his desires will be relieved from the world and its trials, and he will be protected and safe from its harms.
Source: Hilyat Al-Awliya 18
Ibn Rajab reported: Ibrahim ibn Abu Alqamah would say to people when they returned from an expedition:
قَدْ جِئْتُمْ مِنَ الْجِهَادِ الْأَصْغَرِ فَمَا فَعَلْتُمْ فِي الْجِهَادِ الْأَكْبَرِ
You have come from the lesser jihad unto the greater jihad.
They said, “What is the greater jihad?” Ibrahim said:
جِهَادُ الْقَلْبِ
It is the jihad of the heart / intellect.
Source: Jami’ Al-Ulum wal-Hikam 19
In fact, the great Caliph Umar ibn Abdul Aziz likewise considered this to be the best and greatest jihad, even though he himself led armies against the enemies of Islam.
Ibn Muflih reported: Umar ibn Abdul Aziz said:
أَفْضَلُ الْجِهَادِ جِهَادُ الْهَوَى
The best jihad is the struggle against desire.
Source: Al-Adab Ash-Shar’iya 131
Thereafter, great scholars of Islam wrote pages and pages about the jihad against the soul and methods of purifying the heart / intellect, such as Ibn Al-Jawzi, Ibn Al-Qayyim, and Abu Hamid Al-Ghazali. Scholars often referred to this spiritual struggle as the Greater Jihad because it takes precedence over any outward physical struggle we endure.
Jihad of the soul / self is the foundation of all Jihad. One must struggle [Jihad] against illiteracy, poverty, intolerance, laziness, but unfortunately the so called Muslims fight against innocent people who do not subscribe to their respective ideology. A true Muslim cannot wage jihad against non Muslims unless he has first waged jihad against his soul and desires before he goes out against them.
Furthermore, armed jihad against an external enemy has conditions and limits and not every Muslim needs to perform it, yet the internal jihad against the soul must be practiced by everyone. A just armed struggle [jihad] cannot be waged by people whose hearts and minds are defiled by hatred and who are ignorant of Islam’s basic teachings of peace and security.
Therefore, the jihad [struggle/fight] against the soul must be practiced by all of us on a daily basis. We must struggle to purify our hearts / minds from all diseases that lead to transgression and sin, for only in this way can our external struggles be made just and upright.
Success comes from Allah [our own system of consciousness], our System is All Knowing. 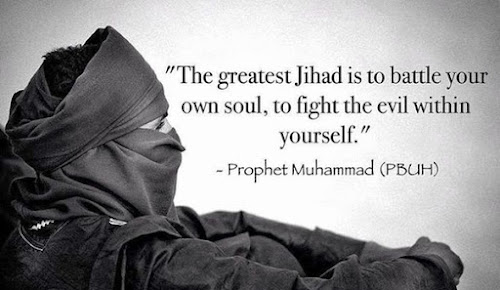 And they ask you about what the period / moment of flow of thought [الْمَحِيضِ]? Say, "It is a stress / pressure [which compels to do things against our own will], so keep away from the desire / urges [النِّسَاءَ] during the strong flow of thoughts. And do not be close to them [urges] until they are pure. And if they have purified themselves, then yield to them from where Allah [system of consciousness] has ordained you. Indeed, Allah loves those who are constantly repentant and loves those who purify themselves."


الْمَحِيضِ - flow of urges, desire after maturity / puberty, age when the urges, desire need to be controlled, torrent overflowed or poured out - The triliteral root of الْمَحِيضِ - is ḥā yā ḍād (ح ي ض) occurs four times in the entire Quran, in two derived forms:

The words تَطَهَّرْنَ and الْمُتَطَهِّرِينَ relate to mental purity rather than physical cleanliness.

Your urges are a fields for sowing seed for you, so come to your place of cultivation however you wish to put forth [righteousness] for your souls [Nafs]. And be thoughtful of Allah [system of consciousness] and know that you will meet Him. And be sensible to those [thoughts] who believers (thoughts that believe).


Our urges, desires are like ploughs which cultivate our lower consciousness before sowing seeds in it, that's why it is compared to fertile field for sowing seeds which are bound to grow and help us in reaching our aspirations or meeting our goals.