GO BEYOND WHAT YOUR PREDECESSORS COULD NOT SEE

Life must not be a daily battle to excel. It's a continuous struggle of thought process swinging between gloom and glow. Enjoy the challenge of roller coaster called Life. It must not be a fight against each other but against one's own self.
Life is a self searching project to understand the mystery of self, origin of thoughts, efforts to understand our own script of life, self's urges, self's desire, self's purpose, self's role and freedom to seek the enlightenment to choose the right path. A struggle to see with our own eyes and think with our own heads rather than depending or relying on writings we don't understand.
One of the popular stand of the masses while arguing is that they stood on the solid grounds of what their forefathers believed and what the majority followed. I don't summarily reject what our predecessors thought or what society thinks. But are we going to stop at where they ended or are we going to probe the pages of life further? There could be nothing more leisurely and luxurious than to believe in the illusion of a living comfortably while being parasitic on borrowed thoughts. We can rest in the comfort of our parental upbringing but the problem is the world is not standing still, it keeps on changing. And ideas have to evolve, grow further and must be conducive to adaptation according to the demand of the current situation. We cannot rely on old solutions to open new doors. We just cannot afford to relax and wait for the imaginary "Day of Judgement" or judge people by calling names - One has to take accounts for their own thoughts and deeds every moment. The alibi of the borrowed ideas will not take you anywhere except in the labyrinth of darkness.
The serious question to ask is whether my ideas are my own or borrowed. We often make others' thoughts as our own because of the inability to think for ourselves. This inability to think is often induced, institutionalised and celebrated by those having herd mentality. We have made simple religions as specialised subjects. We look to "experts" to do the religious thinking for us like how we sometimes let the quacks do the medical thinking for our own health and we don't ever make an effort to ponder independently about the consequences it may have on our mind and body. We don't feel like educating ourselves on such important matters. We let others to do thinking on behalf of our own thoughts. I would fain to buy this argument if any sane thinking mind accepted alibi.
Thinking is too important to be left in the hands of either the clerics or the ideological zealots. This is not just a matter of physical life and death. This is even much bigger. It is a question of our existence. It is a question of living between Light and Darkness.
Our own mind is the vibrant messenger don't bury it and sing unnecessary hymns upon the "holy personalities". Usually people are dumb and deaf, they don't realise it and have been ignoring the living inherent voice of the messenger for a very long time. Its high time that we heed the inherent messages, signs, indicators that are much clearer, self explanatory, relevant to self, pure, authentic & free than the what is served to us from the clergy's pulpit.

It is often misunderstood that mentioning Allah along with Rasul is like association of partnership (shirk) but what we failed to understand is that the book Quran emphasis that obeying rasul is like obeying allah. Those who believe Allah as a God and Rasul as His human deputy will never understand the message of the book Quran on the contrary they will be lost in the History of Middle East "Prophets". 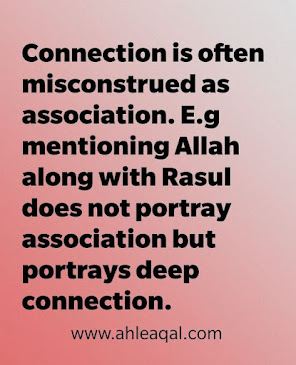 "MUSLIMS" DON'T WANT TO COME OUT OF THEIR "HISTORICAL PRISON" 😔

"MUSLIMS" DON'T WANT TO COME OUT OF THEIR "HISTORICAL PRISON"

Dictating His terms and conditions in old Arabic language to a poor orphan during the last 23 years of his life. Mohammad bin Abdullah (saw) who reportedly died in 632 CE was that special Chosen Man of God from Arabian Peninsula.
Traditions say Mohammad (S) was entrusted by God to lead mankind from darkness to light. For that purpose we were made to believe that his chest was opened and his heart

was purified by an Angel when he was still a child. After the age of 40 he regularly used to receive messages of guidance from God through 24x7 Gabriel (a.s) courier service as and when the situation demanded. The blessed chosen one (mustufa) even travelled across seventh heaven to meet his Lord God.
Looking from the traditional point of view it is believed that the job of unlettered Mohammad bin Abdullah (pbuh) was to spread and implement the Laws of God upon the entire Earth

It is strongly believed that the book of God is dictated in old Arabic language and is meant for the entire mankind irrespective of what language they know. Learning the Quranic language is a part of "Islamic culture" and matter of pride for every individual Muslim.
The devote followers of Mohammad (saw) are supposed to strictly adhere to the "Divine Laws" of the Quran by learning Qur'anic Arabic with the understanding of the manufactured historical context. According to Islamic scholars God revealed particular verses on specific occasion to Mohammad bin Abdullah (pbuh) for imparting fixed solutions for the benefit of entire mankind. Later on it became incumbent on every sincere mohammadans to persuade his mission of spreading the archaic contextual teachings across the globe

and even in this modern world.
This mission is undertaken to please the Imperceptible God because if He is satisfied with His devotees for correctly practicing the given commandments then they are entitled for an easy passage to the promised land filled with beautiful young maidens, exotic food, rivers flowing with water, milk, honey and alcohol in Paradise.
The gullible followers fell in the trap of enchanting Paradise. Apart from understanding the book Quran they also made an extra efforts to study the "genuine history books," by searching for the right contextual happenings for the particular situational verses, without which it is said the message cannot be inferred correctly.
The present understanding of the entire Quran depends on the particular situation, circumstances and happenings of "history" before 632 CE.
Unfortunately this is the only text book in the world where common sense, expertise of language, grammar and context within is ignored or is less important than the outside context forged by the third parties after 632 CE. The creators of the Qur'anic context were astonishingly not even the contemporaries of author of the book. This is a tremendous mockery of a Great Arabic Literature by none others but by those who claim that they love the book Quran more than their lives.
What a tragedy

A book said to be the word of Arabic God but cannot be understood without the crutches of history written by Persian men.
Bigger concern is majority of "Muslims" believe their brain is incapable to correctly guide them so they need to rely on the catalogue which they cannot comprehend. This is the reason they continue to believe in such unpalatable mythologies. A major reason for their downfall and humiliation is that they think the translation of the book done by their respective scholars is real message of the Quran. 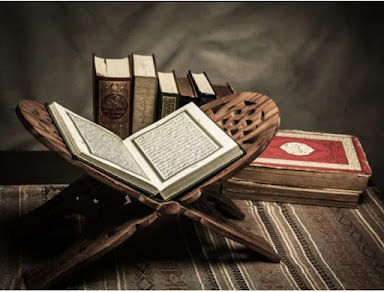 THE TRAGEDY WITH THE BOOK QURAN

THE TRAGEDY WITH THE BOOK QURAN

The biggest lie or blasphemy ever been openly told to Muslims that every verse of the book Quran is historically contextualised. A false impression was created in the ignorant minds that the message can only be correctly inferred by taking proper historical context into consideration. Tell me how a historical contextualized book can be a permanent piece of guidance for all time?
To make their forgery justifiable and popular, a special tool in the name of shaan e nuzool or particular context of the circumstances of "revelation" was cleverly crafted so that the verses of the Quran can be easily manipulated under the false pretext of right context. Each verses of the Quran was separately linked and twisted to fit in with the invented context thereby ignoring the actual theme and context of the Quranic narratives. This way they broke the interrelated sequence of a single storyline into separate statements of edict.
The intense stealth operation was undertaken to sabotage the living message backwardly into the canons of the dead. Exclusive dictionaries, lexicons and rules were created for the tailor-made study of terminologies of the Quran.
Lastly systematic religious schools were established in various "Islamic" belts by "Arab and Persian Imams"- where these fabricated compiled events were taught so that to justify why the new concocted syllabus is linked in the response of so and so verses of the Quran that was revealed to clarify particular circumstances. In such bogus way "scholars" of Islam were produced where more emphasis is given on pronunciation, rote reading and mugging up the "Islamic stories" by heart.
Finally studying of these fictitious context or events have become more important than the actual message of the Quran. For the followers of the book Quran understanding the pure message without these deceitful contexts became an unimaginable dilemma. The ultimate result was that the vibrant message got intangled in the slyly woven stories thus making the message intangible without the invented historical context. 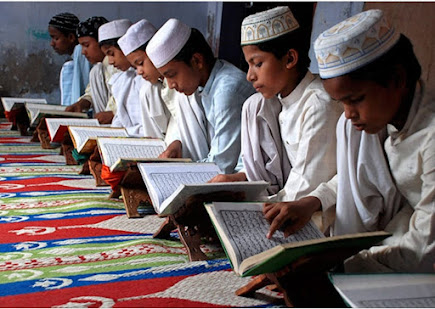 The basic purpose of salat is to connect with our own quran and with our own script (al-kitab), not the physical book of 114 chapters. The establishment of salat is not easy except for the humble and patient. Gibbering is not salat but ritual prayer called namaz in the Indian subcontinent. 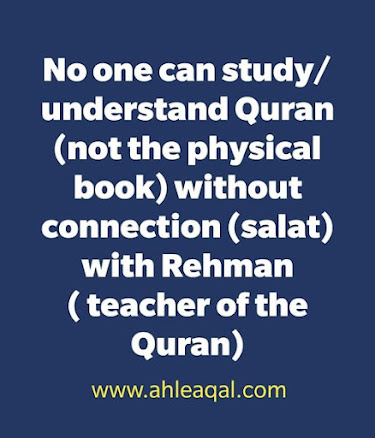 Proverb 3:20 "Behold, I stand at the door and knock, if anyone opens the door after hearing my words, I will come in and eat with him, and he with me"
In the book Quran Isa ibn Maryam is personified as the zenith of knowledge. He is called the word of allah (bikalimatinminhu 3:45), the one who continuously knock on your door of knowledge (heart and mind) providing you food for thoughts so that you can chew on them and evolve.
Listen to the words of wisdom through Isa ibn Maryam. Resurrect Isa in you, keep your doors open to hear and obey. 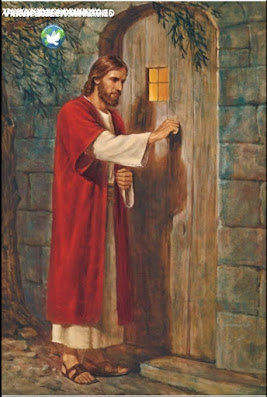