A very small surah with a very profound message emphasizing that nobody has less or more. It's all in the mind. Everyone has an equal capability / scope of growth. Making proper use of your talent and exercising your mind. Over powering the world through knowledge is the core subject of this surah.


The respected author of the book Quran urges that the Rabbul-Aalameen has provided mankind with superior inherent qualities, one of which is to express our-self. One of the meanings of Kausar is to talk profusely. The quality to express surpasses all the other qualities because this is the only difference between other species and us. The faculty of reason is a human privilege. It arises from the ability to think. All other beings lack this faculty. Reason makes human the masterpiece of all creations. But few make an effort to develop and master the the art of thinking and implement it. The respected author wants us to realize that thinking only is not enough we have to converse / talk / plead (صلو) with our consciousness / mind continuously with conviction of action. We can achieve success only if we consult the subject of our interest passionately with our own consciousness [Rabb], that will leave behind all competitors, rivalry and negativity which are termed as our enemy of progress.

The theme of this surah is لِرَبِّكَ  Rabbuka (singular) and the respected author directly addresses us by using singular form of pronoun, which means for your Rabb only. Kausar also means something which is done continuously. Thinking is the only thing which we do continuously. When AL is added to Kausar, it becomes a specific special quality of thinking. So before taking any decision one should meditate / think or talk or exercise for our mind/consciousness [Rabbuka] - The prefixed preposition ل lam in لِرَبِّكَ  means for your Rabb (Rabb ke khatir / Rabb ke liye) and not to your Lord as translated by all the conventional translators. Li Rabukaa also proves my point that Rabb is mind.

Good thoughts are food for the mind which could nourish and make you grow in intellect and vice versa. So before committing to undertake any task, it is vital to know or understand our limitations and strengths by talking  /conversing / plead / follow (صلو) our Rabb for His sake. He is the only one who knows us thoroughly - in and out. The respected author wants us to consult the Rabb and totally cut off (الْأَبْتَرُ) the negative or wrong thoughts which are termed as enemy (شَانِئَكَ). So before taking up any task, remember whatever maybe the consequences or result of the task, it is the mind that has to bear the brunt which is worse than any physical torture. So whatever we do it is only for HIM (Rabb) and talking with HIM is good for HIM, as HE is the integral part of us.

With the identification of the System of Consciousness- The Rehmaan, The Raheem

(2) So converse for* your Rabb (consciousness) and master it

(3) Indeed your enemy (all your drawbacks) will be isolated / eliminated

لِرَبِّكَ* = For your Consciousness, Mind, Lord, Nourisher, Possessor, Sustainer, Owner, Having Authority, Ruler, Governor, Commander, Up-bringer, Master, Chief, Reformer, King, Ribbath/Rabbiun means group of learned/like-minded people with similar aim, Rabbani means knowledgeable man - Rabbul Aalameen means The knowledgeable Consciousness. Rabbul bait is head of the family and Rabbathul bait means housewife. As no translator has clearly defined the invincible Rabb, thereby creating confusion and encouraging the philosophy of supplications, worship, rituals addressed to the mysterious Rabb without action - Rabbani means learned or knowledgeable man,Tarbiyat means upbringing, Rectifier, Reformer, Accomplisher, Bringing to the state of completion in degrees. Rabbubi means science, or knowledge- Marabb means one who counsels - After an intensive study of the meaning with the “Quranic” context, I concluded that if we have to define Rabb in a simple and a single word which encompasses the essence of the meaning of Rabb, then Mind/Conscious is the right word which represents the word Rabb. Understanding the essence of the message is of utmost importance, than just sanctifying the word and venerating it. My aim is that the translation should be reader-friendly, simple, logical and subjective, without fear, greed and sacredness of any sort and above all it must be educative and appealing to all mankind. -prefixed preposition lām – genitive masculine noun – 2nd person masculine singular possessive pronoun

الْأَبْتَرُ = anything which is cut off from good or prosperity, isolated - nominative masculine noun

Main points of the Surah:

Don't get influenced by the outside world or competitors or peer pressure. Man has been provided with a special status which other animals lack. It is important for you [self] and your mind / consciousness to communicate with each other, that is what salli means. Don't be dependent on others for advice. Consult and trust your omnipotent mind and be patient, don't be in a hurry but take your time to ponder - Before undertaking any task, big or small, the final authority is you, this is what the honorable messenger proposes - as the Rabb knows your limitations and strengths - It is only your mind that makes you taste the experience of heaven or hell. So better consult your Rabb and trust yourself and cut off all your negativity. To ignore this important aspect would be a serious abnegation of responsibilities and duty.

This surah from the traditional point of view:

From the traditional point of view this surah is about ritualistic prayers and the sacrificing of cattle, so that your enemies get isolated from you. This does not make sense to me that the Lord has granted you a river in paradise, so pray and sacrifice in order to ward off your enemies. People have the right to select the interpretations that appeal to their mind. No offence intended. Our only concern is to think with an open mind.

Why I have not interpreted salli as namaz or prayer ? Let us analyze the word Salli in verse 2 - It is 2nd person masculine singular (form II) imperative verb (الفاء استءنافية , فعل أمر) A verb that is already transitive becomes doubly, as it takes a meaning of "to talk" or "involve in talk" or converse, so the meaning could be "to make one listen" i.e. "to converse". Whereas, if I take the meaning - to pray (namaz) as the traditionalist did, it would be only one way because the act of prayer is only one way and the other side is absent or invisible or is imaginary. If we take the meaning of salli as converse or talk it makes sense and will be grammatically justified as well. However on the other side, its Rabb that is listening and giving back opinions/solutions/feedback or signals, as it is a conversation with/for the Rabb/Mind and not God. Our Consciousness / Mind answers back, but God does not.

And also considering the fact that the word Salli is always used in the transitive form, while Salat is non-transitive, it becomes clear that these are not synonyms or equivalents of each other. More explanation will be provided in other surahs.

One origin of salah is the word 'sila' صلة meaning a connection link as in 'silat ar-rahim', the 'ties of kinship'. Scholars do say that Salat is a sila between you and your Lord. Traditionally, salat refers to the five prescribed daily prayers, although salli comes from the same family of words, though it does not mean prayer.

Recognize a transitive verb when you see one.

A transitive verb has two characteristics. First, it is an action verb, expressing a doable activity like kick, want, paint, write, eat, clean, etc. Second, it must have a direct object, something or someone who receives the action of the verb.
Here are some examples of transitive verbs:

Important note: When no direct object follows an action verb, the verb is intransitive.

Understanding the essence of the message is of utmost importance than other factors. My intention is that the translations should be reader-friendly and simple. My understanding of the subject is not driven by being in awe with the language or grammar or knowledge of Hadith, but from the Light that is emitted through the message itself. I don't translate just for the sake of translation, unless I get the lessons from the message. The next step after I understand the message is to select the relevant vocabulary from the Lexicon that fits in with the essence of the message. Utmost care is taken to explain the message to the readers in an easy and best possible way; otherwise the purpose of translation is not attained. If the message is only meant for the elite classes such as scholars, researchers, government officials, as perceived by many, then it is of no use and it loses its value. But this is not the case, the message definitely has a universal appeal, whose main aim is to uplift the general public from dependence on others in all matters of life. There must not be any demarcation, as this beautiful message encompasses and crosses all boundaries and limitations.

لِرَبِّك -  Rabb is attached to 2nd person masculine singular possessive pronoun which means the respected messenger is emphasizing for your personal Rabb because of its singularity. 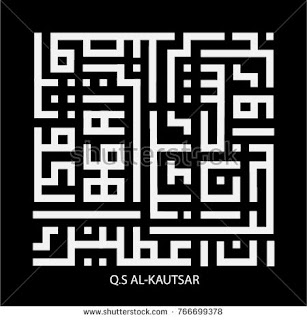