AYAAT ARE SIGNS NOT VERSES

Ayaats (آيَاتٍ) are vibrant signs that are valid in present times. Ayaats does not denote dead history or parables. It is a rational mark by which a person or thing can be known or understood. Ayaat is a feminine plural noun and a derivative of vocative particle يَا which is addressed to that is near and demand sincere attention.

One cannot understand the message of the book Quran simply by just literal selective reading. There are signs in it which we need to decode. Unless we understand the overall theme of its message, we cannot able to grasp it's gist. 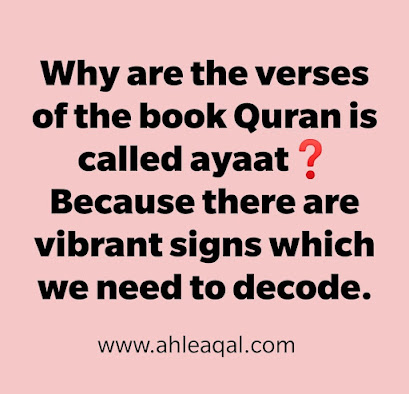 La ilaha ilallah, muhammdur rasul allah - utterance of this phrase is a must to become the member of the elite club called Islam or Muslim.
This phrase is called Kalimah i Shahdat which means utterance of testimony of evidence by witnessing. Kalimah means utterance or words and Shahdat simply means to witness to see or to know thoroughly and able to explain to others as well.
Only those can provide such witness who have seen allah and mohammad with their physical eyes and if people demanded proof of their testimony they can able to give evidence of it.
Now you tell me readers have any so called Muslims have seen allah and muhammad in their lifetime, so how can they utter these words as a witness.
The complete phrase is
“Ashadu an la ilaha illa illa-ilah, wa ashadu anna muhammadan rasul ullah.” Translation: “ I bear witness that there is no God/god but allah, and muhammad is the rasul of allah.”
Now my question to those who utter these words, have they seen allah and mohammad in their lifetime. If not how can they say I bear witness if you have not seen them.
Are Muslims not committing perjury by professing that they have seen allah and rasul, when the truth is that they have not seen allah and rasul

I hope you got my point