The early Arab imperialism misconstrued as الفتوحات الإسلامية‎‎, al-Futūḥāt al-Islāmiyya, also referred to as the Arab conquests or early Islamic conquests falsely attributed that it began under the command of Muhammad bin Abdullah [PBUH] in the 7th century. I would say these conquests were actually victory of Arab imperialism over Persian and Roman Empire rather than to believe that it was “Islamic” in nature. The British Empire comprised the dominions, colonies, protectorates, mandates and other territories ruled or administered by the United Kingdom and its predecessor states but it was never construed as Christian expansion or conquest. But unfortunately these expansions were labelled as Islamic conquest by the western Orientalist. "Muslims" fought more wars within themselves than against the non Muslims.

Mohammed bin Abdullah an Arab wise man promoted the correct version of Jews and Christian scripture to Arab world in Arabic language, later recognized as Al-Quran. He established a new unified polity in the Arabian Peninsula which under the subsequent “Rashidun and Umayyad Caliphates” saw a century of rapid expansion but it was far from the teachings of Muhammad, the Arabian Messenger of Peace. Initially the objective of the conquests was mostly of essential in nature, as fertile land and water were scarce in the Arabian peninsula

The resulting empire stretched from the borders of China and the Indian subcontinent, across Central Asia, the Middle East, North Africa, Sicily, and the Iberian Peninsula, to the Pyrenees. And these brutalities in the name of expansion were wrongly attributed to the teachings of a simple wise man of Arabia [many many salutations to him]. Many false stories were concocted on behalf of his name to malign his sublime character.

Under the last of the Umayyads, the Arabian empire extended two hundred days journey from east to west, from the confines of Tartary and India to the shores of the Atlantic Ocean.

Why I call it as an Arab conquest and not as an Islamic because the ideology of Islam [Peace] has nothing to do with conquest of land and properties it only relates to conquest of individual’s heart and mind over all the worldly things. Forced conversion was never a part of Islam, in fact it is against the spirit of Islam. The Ummayads were not at all interested in converting people to Islam because for them collecting taxes to run the Empire was more important than converting people to Islam. Collection of revenues for the public treasury was necessary and because of this they have accommodated and tolerated all "pre Islamic" rituals of Jews, Christians and Zoroastrians. Gradually this revived pagan rituals were given "Islamic color" and that theme is followed blindly by all nincompoop Muslims till date in the name of Mohammed ibn Abdullah the founder of the doctrine of Peace called Islam.


"At the outset, they [early muslims] were hostile to conversions because new Muslims diluted the economic and status advantages of the Arabs."Only in subsequent centuries, with the development of the religious doctrine of Islam and with that the understanding of the Muslim Ummah, did mass conversion take place. The new understanding by the religious and political leadership in many cases led to a weakening or breakdown of the social and religious structures of parallel religious communities such as Christians and Jews." - Ira M. Lapidus


The original followers of Mohammed were basically down to earth desert people. They were always on the move to find pastures for their cattle and food for their families. This migratory nature of desert people was one of the basic reason why they had to travel all the way to Spain, Russia, Africa, China, India, Bangladesh then finally to Maldives, Malaysia and Indonesia all along the silk route. Sometimes they were with the invading armies but their intentions were never aggression but trade; impeccable character was their only strength.

The first thing they did after migrating to foreign land was to learn the local language and mingle with the locals. Although they were with the Arab invading armies but their initial intention was not to spread Islam but to find livelihood. For that they had to learn the culture of natives and participate in their local music, folk singing, poetry and dancing. The love for all and secular attitude of theirs made them favorite of the locals.

Tell me which Arab army and commander conquered Indonesia, Malaysia, Maldives, South India, East India, Bangladesh. There are more "Muslims" than all the Arab nations put together in "non Muslim" lands. The spread of Islam was basically done because of the impeccable character of the Muslim traders in those regions. It is wrong to attribute the spread of Islam due to force conversion by Muslim armies. Those Arabs, Persians, Afghans, Mongols who conquered vast lands had nothing to do with Islam, they were just carrying their imperialist agendas of accumulating wealth and power.

Generally people think anything Arabic or Persian is original Islam. The fact is Arabic or Arabs has nothing to do with Islam as it is a term used for an individual state of peace. The founder of Islam was an Arab and the sacred book of Islam is in Arabic language, that's it, the connection with the Islam ends here. Further on it is an personal endeavor to attain peace; Islam has nothing to do with language, region or personalities and regional conquest.

Submission to Peace [Islam] has nothing to do with bloodshed, fighting for imposition of certain doctrine. The peace of mind is given topmost priority over all cravings of material world according to the Quranic point of view. Peace is a matter of personal choice; it can never be attained by force. Reconciliation is the key mantra of Islam but ironically its followers are far away from its aura. 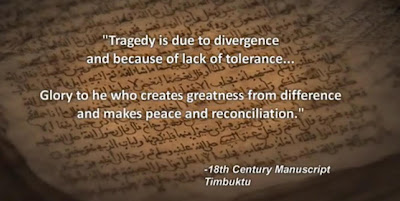