THE ESSENCE OF BISMILLAH:

This is one of most frequently abused Arabic phrase used in our daily lives by almost all the “muslims” throughout the world. I used the word 'abused' because unfortunately this word is used as a ritual before undertaking any new task just as "la ilaha ilalah" used for baptizing a new born child into the "muslim" fold. No doubt BismilahiRehmaniRahim contains a magical formula for the one who understands its true spirit and implements it in their daily routine work. If the essence of this phrase is understood and followed religiously, it can add wonders to our work and there will be no failure, but only success.

Bi ism Allah ir Rehman ir Rahim is not simply for uttering purpose, but it teaches us to understand or get familiarized or or be aware or identify (ism) the System of Consciousness  (Allah) the most important term of the Quran. For those who understand Allah understands that every system have inbuilt consciousness, it is Beneficent and Merciful for them if they understand that system, otherwise it is superfluous.

It is important to know our system of consciousness [Allah] before indulging in any task. Suppose you eat cyanide simply by uttering Bismi allah ir Rehman ir Rahim without identifying its characteristics; the System of Consciousness (Allah) will not be Rehman and Rahim. If we fail to identify our system and the system of cyanide then the Allah will be dangerously conquering or overpowering (Qahar) for us.. Similarly without knowing how to drive a car, one attempts to drive by just uttering the phrase Bismi allahir Rehman nir Rahim will it be Beneficent and Merciful ? Again the answer is NO. The entire message of Harmony and Peace (Islam) revolves around the term Allah (System of Consciousness) and if we don't understand the essence of the Allah we shall not understand anything. We won't be obeying or respecting anything and we will not be able to learn anything. Serving Allah without identifying or recognizing it is tantamount to blind or idol worship. In short we will not progress or succeed unless we understand or identify or be aware of the all important term Allah. I have discussed the term Allah in detail in Surah Ikhlaas.

ALLAH - The System of Consciousness.

ALLAH IS ALSO ONE OF THE ATTRIBUTES OF RABB

And Insha Allah means - If the System of Consciousness deems or desires fit. So whenever anything is done with the understanding of your System of consciousness (Allah) the chances of failure are zero. Understanding Allah is more important, than merely uttering or murmuring the term Allah and its attributes. Without understanding Allah, the pronouncement of the term will just give you a false sense of contentment and nothing else. The expression Allah and Rabb are the essence of "Quran" and our success and failure wholly depends upon identifying or recognizing these expressions. We cannot achieve true state of Islam (Peace/soundness) by just murmuring or counting certain formulas but understanding its true sense and implementing it in our daily life.

Let’s decode this most important Arabic phrase which can change our lives and prevent us from taking wrong decisions.

Bi بِـ is the word at the beginning of this phrase which means WITH and the opposite of WITH is WITHOUT. The word BI cannot be separated from ISM   because it should go along with the identification of the System. Most of the translators translate this word ISM as NAME and Bi as IN, but this is wrong and does not make any sense. Name and personalities does not matter in the philosophy of the honorable author. Going after names and revering personalities is the main cause of our downfall. The honorable author’s main concern was to liberate mankind from the reverence of idols embedded in our minds. We all know that our gracious messenger was here to eradicate idols, then how is it that he would encourage the same as the purpose of dead names are mainly for idolization.
ISM- اسم is the second word of this phrase. After studying 3 different root words I came to the conclusion that SEEN-MEEM-WAW is the most suitable root word for ISM. According to the Lexicon, the root word of ISM is س م و - Basically this word simply means to distinguish or to know the overall scenario. Distinguish also means to recognize or identify or examine things very deeply. Although the word ISM has more meanings but in this context we will chose the meaning as IDENTIFICATION.

ALLAH الله - is the 3rd word of this phrase. ALLAH means any SYSTEM OR UNIT. But the System should have all the qualities described in Surah AL-IKHLAS / AT-TAUHID.

So the meaning of this phrase in one sentence will be:

WITH THE IDENTIFICATION OF THE SYSTEM, THE MOST SELF NOURISHING, THE MOST HELPFUL.

The most important lesson taught throughout the “Quran” or "Furqan" is to identify or recognize the System of Consciousness / awareness before committing to undertake it. In short this phrase means - LOOK BEFORE YOU LEAP OR JUMP. The biggest destruction going on in this world is lack of patience. People don’t understand any task before undertaking it. Their desire to work is driven by either greed or fear, the two biggest factors responsible for failure.

We are instructed in the very beginning to study, analyze and identify the System before committing to go ahead with it. But unfortunately we simply indulge in lip service and the result lies before us.

Before undertaking any task - big or small, it is compulsory for us to understand the details of the system so that we don’t fail in our endeavor to lead a successful and hassle free life. The main cause of all our sorrows or unhappy endings is to misjudge the System before getting attached with or entering into it. So our beloved author's main concern is peace and happiness in our lives that is why he is sincerely urging his followers repeatedly to identify the system before undertaking any work or commitment. The message of the "Quran" is application based but sadly we just engage ourselves in lip service rather than implementing it in our daily lives.

SOME LATEST RESEARCHERS VIEW ON BISM:

Some fellow researchers are of the opinion that BISM is not two words but represents one word and that is ب س م   (BSM). According to them the word Bism is from root B-S-M means to display something, taste, a little smile (Tabassum) which shows the teeth, the extremities of the rising (sun, moon or stars, etc) are also termed as تبسم الطلع - one more example - ما بسمت فى الشىء - I did not taste the thing. But making sense of the context is most important before selecting any root word for the context. And if we deeply look into the meaning of BSM it does not fit into the said Quranic contexts.

According to eminent Sir Edward William Lane Lexicon (volume 4), page 1435, and many other respected lexicographers the Alif in ALIF-SEEN-MEEM - اسم (ISM) is a conjunctive one. But this ALIF is made disjunctive by poetic license when the word commences a sentence, usually with kasra. Usually this rule applies when the sentence begins with kasra and the rule does not apply to 96:1 and 69:52 as the sentence does not start with Bism, so the conjunctive Alif is retained. The conjunctive ALIF will not disappear if ISM comes in the middle of the sentence. The masdar for بسم will be و س م  and ب will be the preposition in this case.

The same rule will not be applied to 11:41 and 27:30 because its root word or masdar is ب س م  (B-S-M), in which it means to display the System in both the above verse references, hence there is no interference of conjunctive Alif and BSM is purely mentioned in the above verses.


IF WE DON'T UNDERSTAND THE SYSTEM (ALLAH) WHICH IS BASED ON CAUSE AND EFFECT,  WE WILL SUFFER TREMENDOUSLY FOR FOLLOWING ALLAH BLINDLY. IN OTHER WORDS WE HAVE TO UNDERSTAND ALLAH BECAUSE - WHAT YOU SOW, SO SHALL YOU REAP.

THE SYSTEM (ALLAH) DOES NOT WORK ACCORDING TO OUR WHIMS AND FANCIES OR BY PERFORMING SENSELESS RITUALS TO PLEASE GOD. BUT BY IDENTIFYING THE SYSTEM AND ACCORDINGLY UNDERSTANDING ITS NEEDS, HELPS US TO SERVE (IBADAT) ALLAH IN A BETTER WAY.

BLINDLY FOLLOWING OR SERVING ALLAH WITHOUT UNDERSTANDING IT WILL LEAD US TO A STATE OF STAGNATION (JAHANNUM). AND THIS TANTAMOUNTS TO IDOL WORSHIP.

LOOK BEFORE YOU LEAP IS THE SHORT MESSAGE OF THIS PHRASE 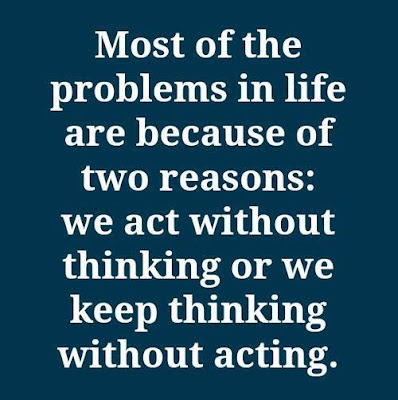