I have said many times that the book Quran is not about cultural issues. It is a book of Taqwa. means to be careful, cautious, diligent about what you think, eat, listen, read, the people you hang out with and the subject your mind and soul is occupied in. In short the Quranic sense taqwa means to always be mindful / cautious of the thoughts you put in your soul / mind emotionally, spiritually because it affects the self mentally as well as physically.


In many progressive countries or culture adultery is not a severe crime as it is in "Islamic countries," that too "the law of zina" is heavily tilted against women. The message of the book Quran forbids anything which hinders our mental growth. It seriously promotes or rather emphasis on right thinking pattern. Wrong way of thinking brings burden to the mind and eventually brings corruption in our personal life that finally spoils the fabric of the society. The distortion of word l-zinā is similar to word الْفِيلِ [l-fīli] in meaning; l-fīli is generally understood as elephant but in the context of the book Quran and in lexicons it also means boaster.


l-zinā [الزِّنَى] is described as fāḥishatan [فَاحِشَةً] by the book Quran [17:32]. Now it is important to understand what is fāḥishatan in the context of the Quran and according to lexicons in order to understand the crux of l-zinā - Some of the basic meaning of فحش is excessive, enormous, foul, shameless, beyond measure, increase by degrees, obscene in language - فحاش means one who is obscene, lewd or shameless in language, فاحش - means one who talks nonsense, absurd, excessive, foul, preposterous, disgusting...From the range of meanings available and considering the root and the Quranic context derived from the meanings I have to conclude that to confine the meaning of word zina to just adultery is prejudicial. If we do that it would be a great injustice to the basic instinct of mankind plus the theme and message of the book Quran. The law against adultery must be in the line of one's own moral compass and it can be practiced or dictated at personal, cultural or society levels. We cannot form harsh laws on the subject of adultery or sex outside the institution of marriage as it concern the basic nature of humans, unless it is not forceful like in the case of rape.

The essence of l-zinā is that talks which are unnecessarily hyped / heaped / mounted upon. l-zinā is a clear cut violation of law of clarity and truthfulness, that is exaggerating or adulterating the perception of understanding thus mixing or adding lies / falsehood with the facts. Al-Zina makes difficult to understand the facts. It is a mental sickness which overpowers the mind to blabber by ignoring the facts. A secure, sound and clear mind will not accept exaggeration of facts. Exaggerated facts will only bond or accepted by an adulterated mindset.

The targeted meaning has to be studied through vast range of meaning available and then it must be deduced through deliberation the theme and context of the entire text. The basic essence or the comprehensive meaning of Zina is to mix carelessly with the truth or anything which is not agreeable with the truth or common sense or mounting upon a thing or over stating... The Quranic contextual meaning can be deduced as exaggeration [pile it on, inflate, over value, magnify] that is to extent the matter of facts out of proportion so as to appear obscene or flamboyant.

The majority of so called Islamic scholars have left behind a great amount of mess and confusion by concentrating only on superficial subjects like worship rituals, dress code, appearance, food habits, marriage ceremony [nikah / walima], burial rituals, punishment for illegal sex, inheritance laws, interest, divorce procedures, hell, heaven, etc.There is no place for tolerance, mercy, love and happiness in the religion of Islamic scholars. These fake scholars kept the masses away from the real and burning issues of the world. The very vast majority of the Muslims have nothing to do with environment, new inventions or discoveries, reformation or charitable work concerning humanity. They just want to please their anthropomorphic God by engaging in silly rituals and expect miracle to happen in their lives.

THE MEANING OF ZINA FROM THE BOOK QURAN:

And do not go near the exaggerator الزِّنَا - al-zina [exaggeration]. It is indeed فَاحِشَةً [a habit of excessive / over much / beyond measure / increased by degrees / obscene in speech language / discourse / utterance] and is a foul path.
Al-Zina -  الزِّنَى signifies mounting upon a thing, fornication, adultery - الزِّنَا is the synonyms of فجر  - deviated from the truth, lying, departed from the way of truth or the right way,  when we deduce the word zina in the context of the word fahishatan it can take the meaning of exaggeration

We revealed it as a state of overpowering influence [surah] and We made it a notch / benchmark / statutes, and We brought it down, in it are clear signs, so that you may continuously give thought / remember / be mindful / reflect.

سُورَةٌ - the root word is سور - the basic meaning is to leap or sprang towards him, rush into the mind, like wine / intoxication rushed into his head, having overpowering effect or influences the mind.

فَرَضْنَا - We have made it a standard or point of reference against which things may be compared [statutes, benchmark, written law, compulsory to follow]


It is the state of exaggerated thoughts and the exaggerator; so overcome / constrain everyone from them completely. And feeling of compassion must not hold you in the submission / obligation of the system of consciousness [Allah] if you continuously believe with the system of consciousness and the moment of procrastination. And let the brainstorming from the believers / faithfuls [thoughts] continuously witness / experience their agreeable punishment.

الْمُؤْمِنِينَ - Al-momineen is a derivative of word أَمِنَ - which means trust, secure and safety but when it comes in form iv it takes the meaning of believer, especially one who believes in his own thought process or in his own self. But some translators are of the opinion that Momin means those who provide security to others. Momins are those who believe that they are secure, safe / trustworthy and can be relied upon. Momin is one of the highest attributes of Allah and humans. Note man possess two types of thoughts, one that give the feeling of consolation, trust, safety and security and the second one are those thoughts that create insecurity, doubt, fear in the mind. Momin and Mushrik are those thoughts that stimulate in transforming the personality of the person, that's why they both are form iv active participle nouns.
عَذَابَ - sweet, agreeable, punishment that is pleasant or punishment which is appealing or according to our liking.

مُشْرِكَةً - root word is ش ر ك - the basic meaning is he shared, participated, partook with him in it, he enter with him into it, engage with him in it, co-partner, confused, dubious, entrap, associate, polytheist, joint - in Quranic sense Mushrik are unclean, dirty, impure thoughts which commingle with the purity or oneness or harmony of the Momin.


According to the book Quran the essence of zina is - l-zinā الزِّنَى is fāḥishatan [فَاحِشَةً] - you need to check the comprehensive meaning of فَاحِشَةً in order to know zina in Quranic sense.

al-zina [exaggeration / extravagance]. It is indeed فَاحِشَةً [a process of excessive / over much / beyond measure / increased by degrees / obscene in speech language / discourse / utterance] and is a foul path - 17:32 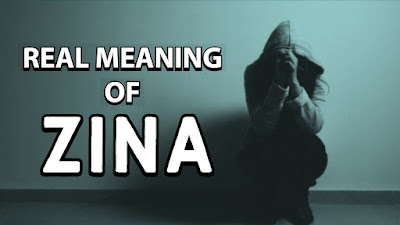